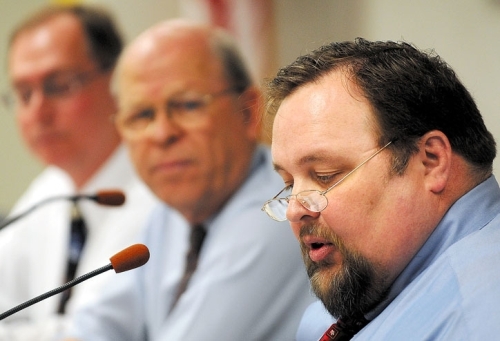 “They (Duncan’s) were very respectable findings. Luckily, not everyone feels that way,” Andrew Hammond, who wants to build the track, said after the meeting. “I do realize neighbors are concerned. Their anger and concern is more fear of the unknown. They’re more concerned about property values and other things. I’m hopeful we can work together to properly mitigate any concerns they have, and we can learn to coexist.”

At previous hearings — after opponents appealed the decision of the county’s planning commission to grant a conditional-use permit for the facility — neighbors protested that the dirt bike motorcycle racing course would bring more noise, traffic and dust to their neighborhoods.

Duncan agreed with those concerns, which is why he voted to turn down the request.

“The proposed motocross facility could adversely impact neighbors who live in the immediate vicinity of the track,” he said. “The track could have a harmful effect on neighbors in the area due to increased traffic congestion, noise from motorbikes, noise from the PA system and increased overhead lighting.”

By a 2-1 vote Tuesday, the Saline County Commission gave approval for a motocross track and recreation area to be located west of Salina at the southeast corner of the Halstead Road and Interstate Highway 70 intersection. Commissioner Randy Duncan voted against the motion made by Commissioner John Reynolds. Commission Chairman Jerry Fowler joined with Reynolds in voting to pass the controversial measure.

Event Calendar by Month     view all